By Malik Junaid October 29, 2015
Chief Minister Naveen Patnaik of Odisha has shown the green flag to the second phase of digitised ration card distribution through their National Food Security Act (NFSA) among the people of Odisha. 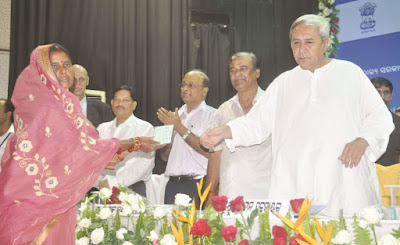 In this second phase, digitised ration cards are gong to to be distributed to 52,88,681 families in 16 districts and 2,01,79,605 people will be benefitted under the scheme, officials said. - Source: Times Of India

The 16 districts that are selected are:


The second stage card holders of the NFSA will get the essentials from December 1, while the recipients of first stage living in 14 different district to benefit rations (wheat, kerosene etc.) from November 1, the authorities said.

In the first stage, the state government had included 14 districts of Odisha. These are Kandhamal, Angul, Sonepur, Bolangir, Sambalpur, Bargarh, Nuapada, Malkangiri, Jharsuguda, Kalahandi, Gajapati, Koraput, Boudh and Deogarh under the plan.

An aggregate of 93.35 lakh recipients of 26.33 lakh families have been acquired under NFSA the first stage, they said.

Police took around 60 individuals into authority as BJP and JMM activists were set to restrict Patnaik's visit to Mayurbhanj. They were, in any case, discharged after the boss clergyman left the region central command town.

Odisha's Health and Family Welfare Minister Atanu S Nayak, then again, confronted the rage of the BJP activists at neighbouring Balasore when he came to the town for conveying ration cards.

Need any help regarding ration card online. You can always as us in comments.